Hemp Surfboards: Riding The Wave Of Hemp Hype With A New Kind Of Board

It took becoming versed in “The Emperor Wears No Clothes,” world travel, and going back to school to study earth sciences and anthropology for Chad Kaimanu Jackson to come up with hemp surfboards.

“I was learning of the great legacy of hemp in ancient China and up to the founding of the US. And in my study of human history and attempting to integrate the concepts of sustainability in my scientific and academic career I found myself in a bit of cognitive dissonance,” says Jackson.

“I knew I had a mission to incorporate my life as a surfer, a Native Hawaiian, and a scientist into contributing to the sustainability/conservation movement in tandem with the cultural revival that was occurring with Indigenous Nations.”

Jackson, 39, has been building surfboards since a young age and started wearing hemp clothes in 2001. For the past 15 years the surfer, who has competed on the Big Wave Tour, has been the primary hemp surfboard builder in the surfing world.

He initially began using an alternative form of surfboard foam based from soybean oils, but became interested in using hemp in any way after becoming involved with the Hemp Museum, a nonprofit originally located in Santa Cruz, and its store.

Jackson briefly made boards for the store before starting to construct his own after gaining sponsorship through Hawaiian-based surf brand Da Hui. He also had a stint with Local Clothing.

In 2007, Jackson started HempSurf. Today he has support from brand Vissla who help him with the boards as well as his surfing and science work.

Other alternative materials Jackson uses in his surfboards include recycled redwood, flax, agave wood core, and bio-based resins and epoxies.

There has been a recent resurgence of interest in hemp surfboards, says the surfer.

“(It) is a simple delayed response of the public and surf communities finally catching on to the sustainability movement, which in terms of hemp, has been fueled by the recent legalization of hemp agriculture, (the) CBD industry, and the prevalence of Instagram and other social media outlets,” says Jackson.

Compared to the price of conventional surfboards, Jackson says the cost of a hemp surfboard is virtually the same. Shortboards are priced between $500 – $600 while a longboard ranges from between $800 and $1,000 and agave boards start at $1,500.

It’s important that hemp is recognised as it has the ability to offset environmental impacts derived from corporate agriculture, big pharma, and the petro-chemical industry, stresses Jackson.

“The organic nature is superior to synthetic materials in the overall life energy the fibers carry, the strength-to-weight ratios are the strongest found in nature (along with flax), superior flexura,” he says.

“This carries over to sustainable agriculture, economics, indigenous cultural revival and empowerment, and celebrates our connection with our ancestors and the tools they have passed on to us.”

He is currently involved in a film project about the Hawaiians who brought surfing to Santa Cruz in 1885.

“The film will segue into how suffers can come together to solve environmental problems and mobilize as a very powerful and influential subculture,” says Jackson.

Kea Eubank’s interest in hemp started over 15 years ago, when he was looking for better alternatives to smoking with butane lighters and matches. Hemp was the way forward. Eubank, born and bred in Maui, and his partner Miranda Campbell formulated “the hemp wick,” a term Eubank says is now used by over 70 different companies, and the first hemp wick company, Bee Line Hemp Wick. Bee Line combines hemp and beeswax, both ancient and renewable resources used in lighting medicinal herbs, pipes and fine cigars, and hand-rolled tobacco cigarettes.

“(We) came to realize how versatile hemp is, and have been looking for other uses ever since, which tends to keep us pretty busy, as there are thousands,” says Eubank.

Using Hemp In A Unique Way For Surfing

About three years ago Bee Line Hemp Wick partnered with Conway Bixby of Bixby Surfboards, a board shaper and river surfer in Bend, Oregon, and began making surfboards out of made out of recycled foam and organic hemp fiber in place of fiberglass.

“We were hoping we could trade out even more of the standard surfboard materials for hemp while maintaining the high performance,” says Eubank.

The hemp comes from Romania in eastern Europe, which Eubank, 38, says he’s found to have the best organic hemp in the world.

“They use a traditional process called retting where they let the hemp break down in the field and then finish with machine processing it into long strands which they spin/twist back together,” he says.

“A lot of other manufacturers use chemicals to break down their hemp to a pulp, and then bleach it.”

Bee Line Wick uses the hemp in a unique way to make the boards, using hemp fibers instead of fiberglass, wrapping the recycled foam in hemp.

“I’m not sure if anybody is doing it quite like us,” says Eubank.

‘Stoked To Have A Hemp Surfboard In Their Quiver’

The boards, which he says start at $650 but vary in price depending on size, are popular.

“Half the people love that they utilize hemp and the other half just love how they look,” says Eubank.

“(Customers are) mostly river surfers, and then there’s people just stoked on anything hemp and to have a hemp surfboard in their quiver.”

“Surfers naturally want to keep the earth and ocean clean because they are immersed in the elements daily,” says Eubank.

“Hemp, if processed responsibly has a lot less impact on the earth, while (the board is) being made, and in the end when the board is no longer surfable.” 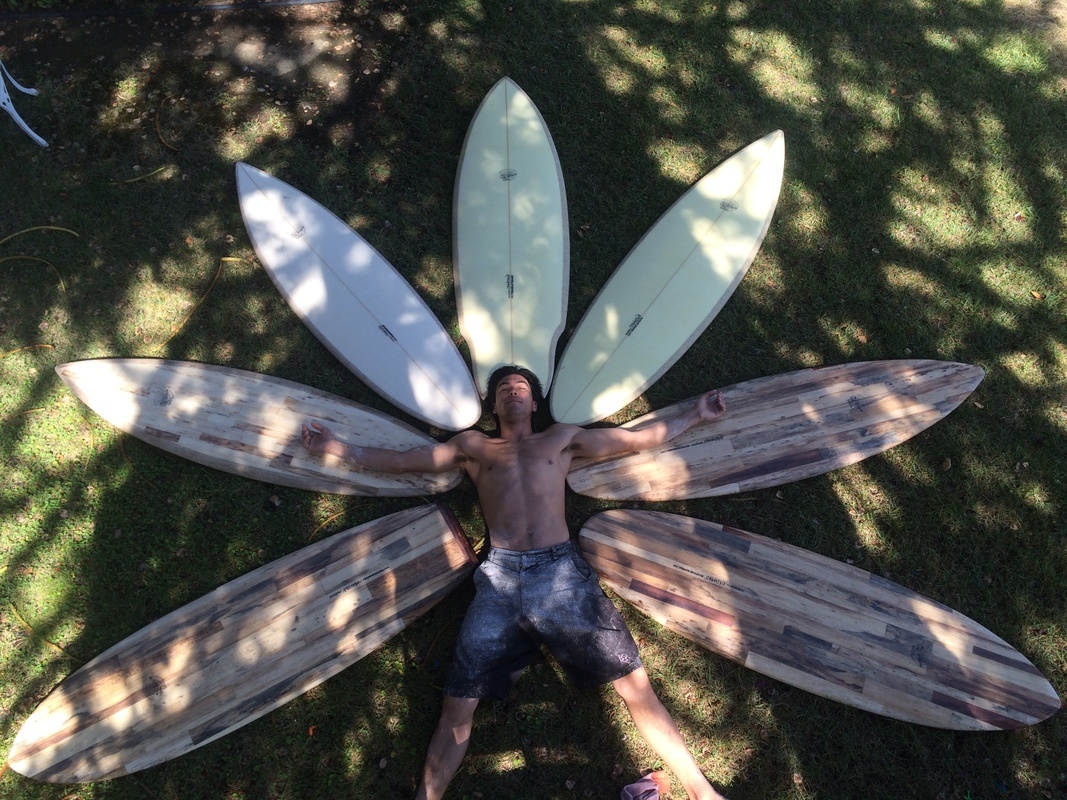