The hemp industry prides itself on being more sustainable, but behind that image there’s still waste and room for improvement.

In theory, farming hemp should not be considered damaging to the earth at all. In fact, hemp can be regenerative to the soil on which it’s farmed.

Yet due to the dramatic consumer demand that companies are rushing to meet, many companies (and thus farmers) are now focused on making as much hemp as possible leaving little to no attention on its quality or the soil on which it was grown on. Our legislation is to blame as well: the law which legalized hemp can lead to the forced excessive destruction of perfectly healthy hemp plants.

Many of us know the hemp industry through its various CBD products, ointments, salves & oils. What many of us don’t know is that those very same products are the result of a complex system of moving parts, spanning across the country, involving thousands of people. What many of us cannot see are the highly specific intricacies at every step, and how they might affect the environment and community around them. Currently, the hemp industry is at an impasse with the environmentalist ideals that it is usually associated with, as there are many problems in the farming and production of hemp that is putting the environment at risk.

For an industry that prides itself on holistic and sustainable practices, it is vital to constantly challenge these practices, and to analyze what hemp can do better.

Today, we would like to focus precisely on how regulations can force farmers to burn entire harvests, and how that affects the immediate area around them.

This article focuses on the start of the hemp supply chain to look at how legislative and market forces shape the hemp industry at the farming level. And how the industry can take steps forward to make themselves truly sustainable, and even reach beyond sustainability to regenerative agriculture.

We asked two industry experts to weigh in on such this important subject. Joy Beckerman, former president of the Hemp Industries Association; principal consultant for Hemp Ace international as well as the regulatory officer and industry liaison for the CBD brand Elixinol; and John Roulac, founder of RE Botanicals & Nutiva. Their input was instrumental in creating this article.

A 5000′ view of the hemp industry and sustainability

Before we can properly draw a picture of the current state of hemp farming, we must first look at the entire industry and the context exists in.

Let’s remember we’ve pretty much gone from almost zero hemp production to a full on CBD “Gold Rush.” That’s thrown the entire industry for a loop. While it’s great that there is such a high demand for hemp-derived products, and the influx of money will ultimately be the reason why the industry will prosper, it that also means is that there are numerous organizations that are inexperienced and lack the proper infrastructure to meet consumer demand. More importantly, they can’t meet the high standards required for quality products.

In times of such extraordinary demand for hemp products, standards get ignored and corners get cut. This corner-cutting can sometimes go unnoticed, as the draw of profit can take up most people’s attention.

Now with the proper context set up, we can effectively explore the farming of hemp.

Burn it, Burn it All!

Under the guidelines set under the 2018 Farm Bill, hemp is only federally legal if it has less than 0.3% THC. By comparison, recreational or medicinal cannabis products found in legal dispensaries can have 15-25% THC or more.

These extremely low levels of THC need to be maintained at every step of the supply chain. For farmers, subtle factors like genetics or weather may lead to their plants exceeding this threshold. Under the law, this “hot” hemp must be destroyed.

Burning ‘hot’ hemp costs farmers and calls into question the ethics of a “sustainable” industry.

This policy is just one of many that have made the industrial farming of hemp much harder than it should be. Because of the relatively new market, many inexperienced farmers end up burning their entire season’s harvest, mainly due to these policies.

For the communities around these hemp farms, this means immediate and widespread air pollution with the added visual of having massive piles of freshly grown hemp being burned in open fields. Not only is it a pollutant and an eyesore, but it calls into question the ethics of a supposedly sustainable industry. The genesis of this article was a reader who wrote to us last year complaining about the smoke from nearby hemp farms.

For the hemp farmer, it’s extremely demoralizing, not to mention expensive. Hemp advocates suggest hemp can rebuild American agriculture. But a hot hemp field means watching that promise go up in smoke along with a farmer’s crops.

But most of this can be prevented, as many of the policies around farming are arbitrary and still rooted in the stigma of the war on drugs. The biggest policy change that needs to be changed is, of course, the 0.3% rule.

As Joy Beckerman pointed out, “the current 0.3% THC threshold that industrial hemp is held to is a purely arbitrary number.”

“There is no strong scientific and tested backing to such percentage in hemp,” Beckerman continued.

She also maintains that there shouldn’t be a static/single-numbered cut-off point for industrial hemp, she pushes for a “margin-of-error” method that better fits the varying nature of growing plants — as well as the diverse uses or hemp. Which makes sense, since there are so many variables in growing industrial hemp, it is hard to always perfectly maintain a level below the arbitrary 0.3% mark.

She also commented on the inconsistencies amongst state-level legislature (states having varying THC cut-off points for industrial hemp), as that further dilutes the guidelines for the industry as a whole.

A problem of legal semantics

Joy Beckerman further attributes this problem in the sustainability of hemp farming to not just the regulations but the semantics of the hemp guidelines themselves.

When it comes to hot hemp, legislators are using words like “destroy” instead of “dispose.”

“Right now, legislators are using the words ‘destruction and destroy’ rather than words such as ‘dispose and disposal,'” she explained. “And while these simple words may seem insignificant to the naked eye, in the legal landscape, they are extremely meaningful.”

Changing such words could mean an end to the draconian tactic of burning masses of “hot hemp” and change the industry to not only be more efficient in growing hemp that fit the THC requirements, but when they do make a mistake and have a ‘bad batch’ of hemp, they can still find ways to utilize that wasted batch.

For example, “hot hemp” could still be used in the creation of hemp fabric, or perhaps hempcrete building materials. It might even be used to generate power, instead of simply burning it in a field. This single change could open up new, sustainable avenues for using hemp and let farmers potentially recoup some of their lost profits.

From sustainable hemp to regenerative farming

You know the old adage: when you use someone else’s stuff, leave it in better condition than when you found it.

For farmers, this is the ideal, as it means that they essentially make the soil they farm richer than before. This concept is known as regenerative agriculture, which is formally defined as “a system of farming principles and practices that increases biodiversity, enriches soils, improves watersheds, and enhances ecosystem services.”

In the agricultural world, regenerative agriculture are becoming the standard that everyone aims for.

In theory, it should be easy to achieve regenerative farming with hemp. Hemp requires fewer resources than many other crops. Let’s take corn for example, which approximately takes up to two times more water to grow than hemp.

When grown at a large scale, the hemp fields can quickly become havens for pollinators, birds and various small animals, which promotes a better overall eco-system for the surrounding area. Then, when harvested, hemp leaves the fields it was grown on with plenty of left-over biomass, making the soil extremely nutrient-rich.

Why hemp can be more sustainable

At least that’s the theory.

When talking to John Roulac of Nutiva and RE Botanicals, our conversation focused to the current mindset of the hemp industry itself.

“Most of the industry is not focused currently on soil health and whatever the fastest way it is to grow the plant, what they’re really focused on is the hemp seed itself.”

He suggested the focus is on the biggest, rather than most harvest. Roulac pointed out that the vast majority of the farmers are focused on this volume mindset, which he called a “gold rush mentality.”

Less than 1% of hemp farmers are certified organic, and most of the rest simply use synthetic fertilizer as its the cheapest option. He thinks the real problem behind the industry’s inconsistencies are the people themselves: they see themselves as business owners rather than cultivators working in unison with our planet.

Roulac previously appeared on the Ministry of Hemp podcast, where he expressed his passion for regenerative farming. That passion has been evident throughout his entire career and in his companies. To Roulac, the success of Nutiva and RE Botanicals are proof you don’t need to compromise between sustainability and economic viability.

While we must admit the overall tone of this article is focused on the bad parts of farming hemp, we believe that this is merely a roadblock on the way to a more sustainable future for hemp.

It’s easy to get focused on the bad, but with people like Joy Beckerman and John Roulac championing for a better, more sustainable industry, it is only a matter of time before we reach regenerative and zero-waste farming.

Meanwhile, there’s also hope for sustainability at the other end of the supply chain. Companies such as 9Fiber, which we’ve written about before, seek to recycle hemp waste. With a focus on true sustainability growing throughout the hemp industry, we’re feeling more idealistic future about the future. 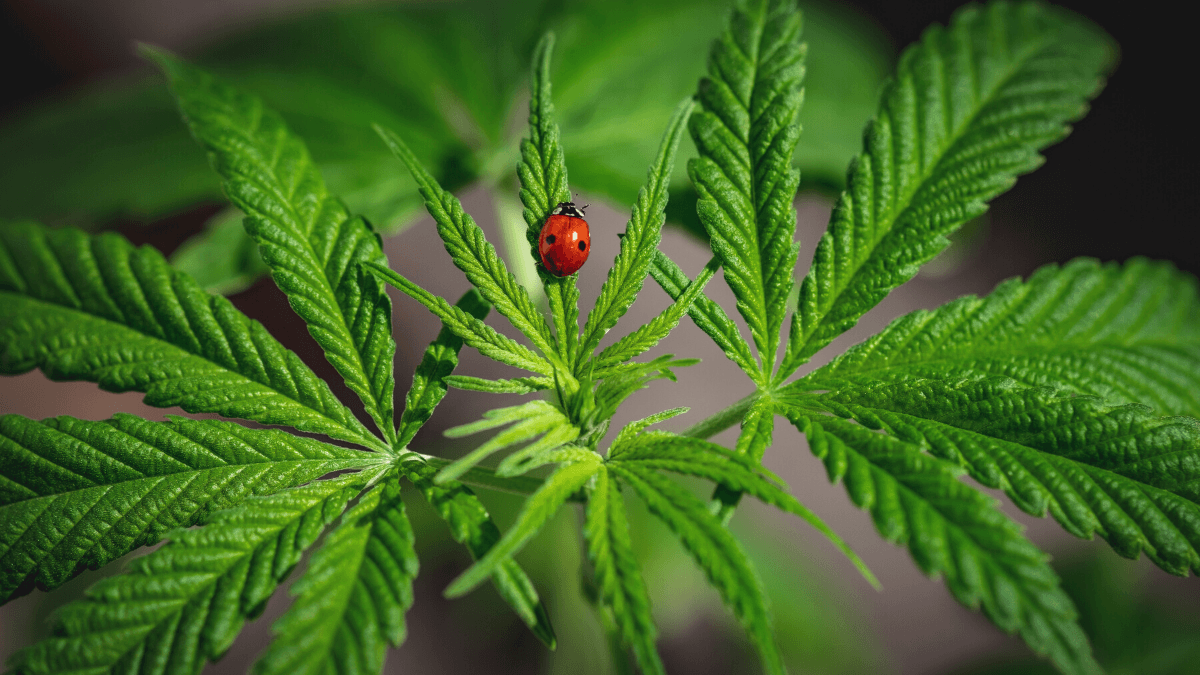