Leigh Humphries, from Wilmington, North Carolina, is passionate about hempcrete, the sustainable building material she used to build a unique doghouse.

Humphries recently graduated with a degree in Sustainability Technologies from Cape Fear Community College, and the doghouse was her “capstone” project in the vocational program.

While you won’t yet find hempcrete doghouses shading Fido from the sun in many back yards, it’s a building material with proven benefits and a growing appeal. Hempcrete homes are popping up from Kentucky to Alaska and beyond.

When we heard about Humphries exciting project through coverage on Wilmington’s WWAY news, we reached out directly to find out more about why she chose hempcrete, what it took to build the doghouse, and how her project was received in her community.

‘A Really Healthy Building’: The Many Benefits Of Hempcrete Cape Fear’s Sustainability Technologies Program has a dual focus on green energy and sustainable building. Humphries told us that while she enjoyed learning about renewable energy technologies, “I kind of immersed myself in the construction and building science part of it.”

She first heard about hempcrete in her Green Building class, which offered a broad overview of various sustainable building options. Captivated by hempcrete’s potential, she immediately began researching ways she could use it in her final project.

“I started collecting some research and talking to people,” Humphries recalled. “Finally it came time for my capstone class and I went for it. I got the approval of my academic advisor and went with the doghouse idea.”

One of the most appealing features of hempcrete for her was its vapor permeability, which allows structures to “breathe.” This helps make hempcrete extremely resistant to mold and other health hazards.

“It’s a really healthy building to live in,” she observed.

Here’s how Humphries summed up hempcrete’s benefits in our interview:

“It’s healthy for the occupants, but it’s also really easy, once you get the process down, to build with. It’s a quick process. It’s a really cool material. It’s environmentally friendly obviously and it has really great health perks as well compared to conventional manufactured building materials.”

“Hempcrete is made from hemp shivs, a lime-based binder and water,” Humphries explained.

Hemp shivs, the chopped up fibrous core of the hemp plant, are the key ingredient in hempcrete. “The biggest problem I had was acquiring the hemp shivs. They’re really expensive.”

Hemp growing is only just returning to North Carolina, so the shivs for Humphries doghouse had to be imported from Virginia. American Hemp, LLC, a firm in nearby Winston Salem, helped Humphries obtain the materials and Patrique Veille, the company’s Strategic and Project Management Consultant, acted as an informal advisor to the doghouse project.

A commercially available lime binder is used in professional hempcrete structures, but budget constraints on the doghouse forced Humphries to mix her own.

“The most challenging part of the project was making my own lime binder,” Humphries explained. “I did that with a specific ratio of hydraulic lime, sand, a little bit of Portland cement and water.”

She stressed that this homemade option was only viable because the doghouse isn’t intended for human habitation.

It took some experimentation to get it just right. “A few test bricks later I found the correct ratio and it worked out perfectly.”

Using wood that could be recycled later, Humphries built a form for the doghouse, then poured the hempcrete inside. After allowing the doghouse to dry overnight, she carefully removed the form and allowed the structure to finish setting. In all, she estimates the project took about 3 and half months, including about 2 weeks for the doghouse to fully dry.

Hemp still sometimes has an uncertain reputation, thanks to its association with psychoactive cannabis and decades of hemp prohibition under the war on drugs. Happily, Humphries said she received “zero resistance” to her doghouse project.

“Everyone was really supportive and excited,” she told us.

She took the hempcrete doghouse to Wilmington’s Earth Day Festival in April, where it received an enthusiastic response. “I had quite the audience the 4 hours I had it at the Earth Day festival. It was really neat.”

Among her numerous fans at the event were Hemp Farmacy, a Wilmington CBD oil vendor, and local builders who were excited to see hempcrete in action.

“Some real estate brokers that I spoke with are also really interested and one in particular is working on getting the local Habitat for Humanity, once it becomes more affordable, to build the first hempcrete home,” Humphries added.

She believes prices for hempcrete will come down, thanks to hemp’s growing popularity throughout what was once tobacco country. “The closest seeds being planted near us are in Wallace, about an hour northwest of Wilmington. It’s really exciting.”

Humphries was hired straight out of school by Above and Beyond Energy, a energy efficiency consulting firm, but she hopes to return to sustainable building in the future.

“I would love to. I haven’t really made a plan for that yet, but all of the positive response is really inspiring and I’d like to see where I can go with hempcrete.” 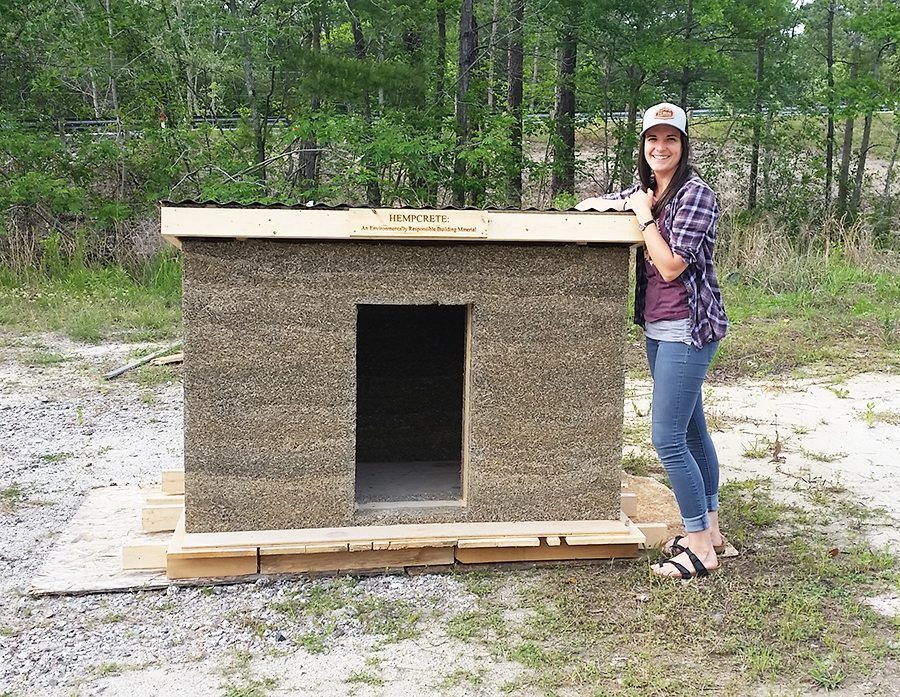